The road to Mt. Fuji

Gunnai woven fabric is high-quality silk fabric woven by using plenty of subsoil water flowing from Mt. Fuji. Worshippers of Mt. Fuji (Fuji-ko) headed to the top of Mt. Fuji, where they believed that gods and Buddha lived.
Tracing the road to Mt. Fuji, visitors find history and culture that developed in the area around Mt. Fuji. 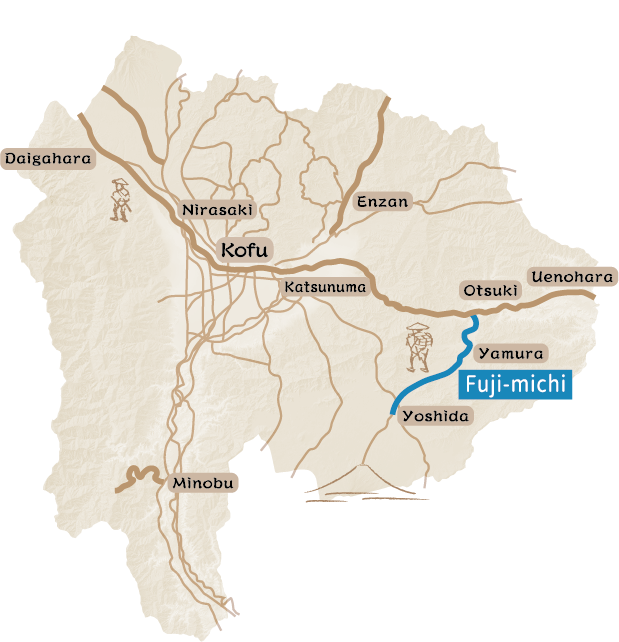 The road to Mt. Fuji runs from Otsuki City to Fuji-Yoshida City. Along the old Koshu-kaido Road, one of the Five Highways (Gokai-do) developed in the Edo Period that start in Nihombashi, the Road to Mt. Fuji separated from Otsuki-shuku and headed to Mt. Fuji. This road functioned as an artery of transport and distribution for the Gunnai area (northern foot and east side of Mt. Fuji). Because it connected to Yamura Village (present-day Tsuru City), which was the center of the politics, economy, and culture of the Gunnai area, it is also known as the Road to Yamura.
One of the specialty products of the Gunnai area is Gunnai woven fabric, which is high-quality silk fabric. Because the Gunnai area is mountainous with a cold climate that is not ideal for rice growing, people have engaged in sericulture and the manufacture of silk fabrics from ancient times. The Road to Mt. Fuji was a distribution route for woven Gunnai fabric made in the villages along the road, and the silk fabric was brought to Edo, Kyoto, and Osaka on this road to be sold.
In the Edo Period, gatherings of groups to worship Mt. Fuji (Fujiko) became popular. People believed that gods and Buddha lived on Mt. Fuji and headed to the summit to pray. They walked on this Road to Mt. Fuji.
At present, National Route 139 (also called “Fuji-michi”) and Fujikyuko Line run on it.

Visiting Yamura, a small castle town at the foot of Mount Fuji

The view of Mount Fuji makes you realize that you have arrived at a small castle town at the foot of Mount Fuji that flourished as the base of Gunnai woven fabric sent to Edo.

The Yamura Domain was established in Yamura, the center of the Gunnai area, in the Edo Period. In the early Edo Period, the Akimoto Clan, which went on to rule the Yamura Domain, developed the town around the castle, and the districts created at that time remain to the present.
Around Yamura-jo Castle, water from the upper part of the Tahara Waterfalls sourced from the Katsura River was drawn into the town around Yamura-jo Castle for agriculture, drinking, and woven fabric production. The water from one of the branch rivers sourced from the Katyu River still flows through the town.
It is thought that the Akimoto Clan, which had moved from Joshu-Soja (present-day Maebashi City in Gunma Prefecture), where silk fabric production was very active, was deeply associated with the growth of Gunnai woven fabric in the area.
With the establishment of branch stores of major wholesalers in Edo, Yamura flourished as a base for the distribution of Gunnai woven fabric. Gorgeous floats featured in the harvest festival (Hassaku-sai) in Yamura were made with donations from Yamura silk wholesalers. This provides evidence of the prosperity of Yamura as a base for the distribution for Gunnai woven fabric.
The road to Mount Fuji (Fuji-michi) now overlaps with National Route 139 and runs through Yamura.

The Road to Mount Fuji (Fuji-michi) runs parallel to the National Route 139 toward the south and separates to the right from the national route after the Toka-ichiba area toward the Natsugari area.
Included in the 100 Best Natural Waters in Japan by the Ministry of the Environment, Toka-ichiba – Natsugari Natural Springs is a blessing from nature from the foot of mountains filtered over a long period of time after the rain and snow that fall on Mount Fuji soak into the ground. Spring water coming from more than 10 sites maintains a temperature of approx. 12 to 13 degrees C throughout the year. It is used for the cultivation of mizukakena (Brassica rapa variety) and horseradish as well as for tap water in Tsuru City. The water and lava from Mount Fuji have also produced a wide variety of beautiful nature. Countless waterfalls flowing down like a shower curtain, a phenomenon called undercurrent falls, and uniquely shaped rocks are also part of the attractiveness developed by Mount Fuji.

Sounds of the water and weaving machines flow at the foot of Mount Fuji.

The Road to Mount Fuji (Fuji-michi) runs to the south of and parallel to National Route 139. The old road in Konuma, Nishikatsura Town was called Shuku-michi. It was crowded by travelers to Mount Fuji from the Edo Period to modern times. In the Meiji Period (1868-1912), there was also a transit hub for horse-drawn stagecoaches in Konuma.
Konuma is the area where we first see the entire view of Mount Fuji with its gentle base spreading out. Worshippers of Mount Fuji might have been moved with the features that gradually increased as they approached from Edo.
A settlement of fabric wholesalers and flourishing businesses handling thread and woven fabrics centered on Yokohama developed along this road from the end of the Edo Period to the Meiji Period. Some weavers are still in business along the old road, and visitors sometimes hear the sounds made by the weaving machines.
Irrigation channels are spread throughout the town, even on the property of individual houses, supply copious amounts of water. This water is also essential for woven fabric production.

Two towns, one commercial and the other religious, facing to Mount Fuji across the road

The Road to Mount Fuji (Fuji-michi) takes a turn to the south at Shimoyoshida, and then heads straight to Mount Fuji.
Shimoyoshida played a central role in woven fabric production, partly because the introduction of chemical fabrics has progressed from the end of the Taisho Period (1912-1926) to the early Showa Period (1926-1989). Kinuya-machi (which means Silk Store Town), where fabric was bought and sold, was a bustling town developed by people engaged in the textile business. The back streets off Hommachi-dori Street still retain the atmosphere of the olden days.
Kamiyoshida was a base for Mount Fuji worship. During its peak, nearly 80 accommodations served worshippers by providing instruction on prayers, information on climbing Mount Fuji, rooms, and meals. On the main street, accommodations standing behind the long, narrow street produce a particular atmosphere.